Does it sound familiar that all major issues always happen on a Friday?

Past Friday, we ran into an issue with random ESXi Hosts where we would see Host disconnected in vCenter and several VMs on it as orphaned or disconnected. In addition some VMs would be unresponsive, VM console would not work and RDP sessions would either freeze or get disconnected though the VM was still pingable.

The Host would self heal after a while and everything would return to normal with few VMs hung that would require a reboot to fix them.

There were several "lost access to volume due to connectivity issues" messages.

This is what was found in the VMkernel logs -

Seems like a pretty straightforward error. The problem seems to be with the fnic driver for vmhba2.
But we are already running the latest supported drivers from Cisco and there is no know issues reported for this driver. There was a know issue in the previous version and here is the KB from Cisco - https://quickview.cloudapps.cisco.com/quickview/bug/CSCux90320

You can check the fnic drivers as follows -

Next stop was the Cisco Fabric Interconnects - Not a single error reported there.

Back to VMkernel Logs to see if more can be found -

There were numerous SCSI sense code errors. Here is how they looked -


You can decipher these codes and their meanings here - http://www.t10.org/lists/1spc-lst.htm

Here is the deciphered version -

This sounds very similar to the vSphere 6.0 ATS miscompare issue. Read more about it here.

So far we had checked the vSphere logs, VMkernel logs, Fabric Interconnects. Next stop would be one level higher - the Nexus 5Ks which are being used as our Fiber channel uplinks. In parallel the Storage team was involved to see if any errors are seen on the XtremIO Array.

Storage Team did not see any errors on the XtremIO Array.

Cisco was involved to look at the Nexus configuration. They inspected the FC ports on the Nexus 5K. Since there are 8 paths we need to inspect each one of them on Nexus A and Nexus B.

Side A looked clean but something on Side B stood right in the face. Upon inspecting one of the FC interface we noticed that the remaining B2B credits were ZERO. Here is how it looks - 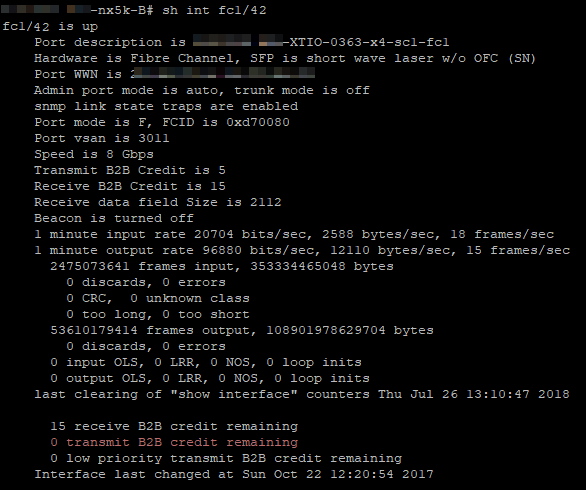 Most of us had no idea what these B2B credits were. Here is a quick summary of what it means and does -

This is also referred to as the slow drain issue


So in our case the FC could receive but could not transmit anything because there were no credits left. When ever an ESXi Host tried to send Data and used this specific path, storage could not receive that data and the data was lost in space. As we know FC is a lossless data delivery and hence the data loss would send the ESXi Kernel in a panic state.

Next Cisco showed us how to find the loss events -

Just run this command on the Nexus and you would see all the events that occurred.

Here is how it looks on a switch with no loss - 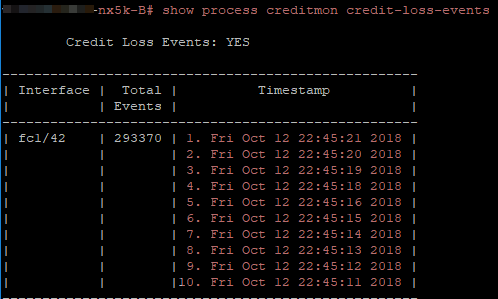 Everything on the physical layer of this port looked OK, so Cisco suspected that the XtremIO Storage is having an issue return/sending back an R_RDY B2B credit, causing the switch to stop processing traffic.

Temporary solution was to just disable this port so no traffic is sent to it and thus avoiding further damage to the VMs as well as any escalations over the weekend ;-)

EMC was involved again and they came back confirming that the Rx Power column is showing a status of Fault on the suspected XtremIO port. This indicated that there maybe an improperly seated cable/SFP, the cable might be bad or that the SFP on the switch is bad.

We ended up replacing both the SFP and the cable.

This ended our 15 hour long call and nobody was called over the weekend !
Posted by Ketan Risbud at 10:02 PM